The Whiskey Jack 2018 tour is now geared up for another season of Canadiana, in all it's forms...particularly through music and story.  Watch for it at theatres, fairs and festivals across the province. This is the only show authorized to perform Tom's songs under the Stompin' Tom banner.

This agreement specifically allows Whiskey Jack and the sponsors of our shows to use Tom's image and his name in the advertising.   Custom designed marketing material is made available to the presenters.   This includes poster design, high resolution professional photos, newspaper article template, print advertising images, promotional merchandise, proactive social media campaigns and more.

This show is mirrored after a typical Whiskey Jack/Stompin' Tom performance, one that you might have enjoyed on one of their tours.  Whiskey Jack played a lot of these shows with Tom over the years and the rules that Tom laid out were simple.....  the content had to be Canadian and had to include Stompin' Toms' hits, some self penned songs as well as songs by the performers who inspired Tom (Wilf Carter).  Our shows with Tom also honoured songs by the peers that he respected (Gord Lightfoot) and others who he inspired and helped along the way (Ian Tyson).

Each program is customized to reflect the community where we're playing.  The one important thing all the shows have in common is.....they will entertain fans of all musical genres.   Everyone will leave the theatre with a smile on their face.

Our fans tell us "we left the theatre feeling very proud to be a Canadian and a whole lot more grateful we live here"!

"Whiskey Jack is one of the best bands I've ever played with".....Stompin' Tom Connors. 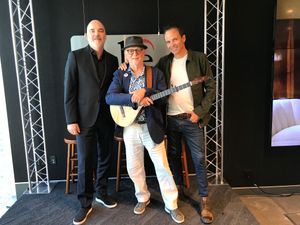