The Real Canada Day Party Was in Wawa...not Ottawa!

I'M NOT SURE when the Canadian flags began to appear in great numbers but by the time we got to Webbwood, they were impossible to ignore - they were everywhere.

IT WAS TWO days before the July 1 party was to begin and we were on our way to Wawa to perform our Canada 150 show.  Stompin' Tom's music was going to return to Wawa to help that famous town celebrate the unveiling of their new goose.   It was obvious that the country, or at least Northern Ontario, was in the mood for a party, the incessant rain be-damned.

FRONT YARDS, car dealerships, restaurants, waitresses, cars and tractors were emblazoned with red and white maple leafs, a sharp but welcome contrast to the grey and bleak landscape that comes with relentless rain, day after day.

WE WATCHED some of the national news when we arrived that night and all the attention was on the armed guards watching over Parliament Hill.  Even though this was going to be the image the rest of the country was going to see all weekend, the real celebration was in the hinterland, in places like Wawa and the Soo and Bar River.

THERE WERE no rifles or soldiers in Wawa, only moms and dads and kids wishing each other "Happy Canada Day" as they hurried to open the door for their neighbour at the local Tim Horton's.  It felt like Christmas morning and I must say, I felt, and continue to feel, quite moved by the experience. 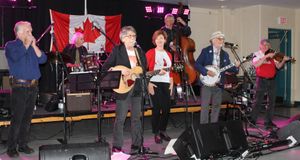 THE WAWA MUSIC FESTIVAL was the driving force that made our appearance possible.  The organizers had arranged for a full weekend of music performed by local bands and singers, all singing their music for their friends and neighbours.  Our show was on June 30th and the "who's who" in Michipicoten were there and they were in the mood for a party.  As part of our show, Jen Cook and I wander into the crowd and ask the crowd to yell our the provincial capitals as we sing Tom's song, "Name The Capitals".  Each town reacts differently but the crowd in Wawa was loud and rambunctious.  Even the Mayor got into the act.  It was quite something.

THE NEXT DAY, July 1, we arrived that morning at the Roberta Bondar Pavilion in Sault Ste. Marie to a massive crowd already in celebratory mood.   They partied all day.  The cool clouds at our afternoon show turned into cloudless skies for our evening shows...just in time for the fireworks. 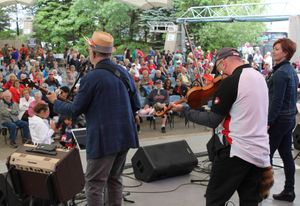 WE PERFORMED ON PARLIAMENT HILL with Stompin Tom in 1993.   There were over 500,000 people there...and it was broadcast to 3 million Canadians on the CBC. Still, that was nothing to the emotion we all felt in the Soo last Saturday.  It was a spontaneous outburst of affection for all things Canadian.  The crowd was giddy with delight when Jen and I ran through the audience asking "CAN ANYONE HERE NAME THE CAPITAL OF.....?".

THEN, AWAKE AT 4:30 am and on to Huntsville to cap off the best Canada Day weekend ever.  The 2:00 pm show at the Algonquin Theatre was a love-in...pure and simple. 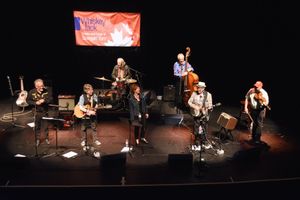 We slept well that night.