As a boy, from 1959 to 1969, I would religiously watch Don Messer's Jubilee on the CBC.  I had Don Messer albums and I enjoyed the Charlie Chamberlain and Marg Osborne duets.  Each week, the show would begin with Don Tremaine on camera announcing, "From Halifax, It's the Don Messer Jubilee".  His face became one of the most recognizable in the country.

As it turns out, he's one of the last surviving cast members and I spent an hour with him at his home in Halifax yesterday.  This was in preparation for the Don Messer salute at the 2016 Stratford Summer Music Festival.  The stories were endless.  It was an absolute thrill!  The Maritime hospitality was warm and inviting.... as though there was any doubt. 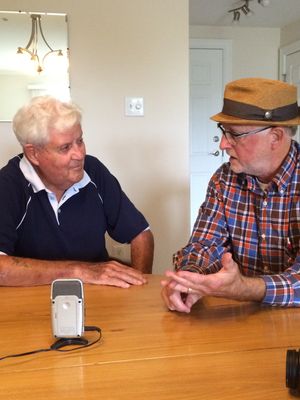