In prepartaion for next summer's salute to Don Messer's Jubilee at the Stratford Summer Music Festival, I began to search for surviving cast members of the venerable CBC show.  I was worried we were too late.

I need not have worried.  The stars were aligned a few minutes ago when I received a call from the Don Messer Show MC, Don Tremaine (seen here on the right), just back from the cottage and happily living in Dartmouth.  I'm pleased to report that he is alive and well and eager to share some memories with me next time we chat. 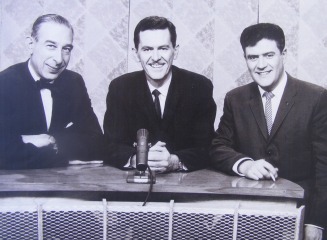 As luck would have it, weather permitting, I'll be flying to Halifax tomorrow on  another matter and will hopefully get a chance to meet with him.