I'm sorry to say, I don't know if Gord Downie ever got to meet Stompin' Tom.  From what I heard on the radio this morning, they should have. My guess is, they would have hit if off.

'm also sorry to say, I know very little about Downie's band, The Tragically Hip.  After listening to a short phone-in segment on my local CBC affiliate this morning, I know a little bit more.  It was announced today that Gord Downie, the lead singer for this band,  has been diagnosed with terminal brain cancer.  Their fans are reeling.  The announcer asked listeners to call in with their "Hip story".  This is what I learned that I didn't know before.

Downie is a poet who plays music.

An entire generation of Canadians was raised on Tragically Hip music.

Downie and his band never broke world wide but are a Canadian phenomena.

Downie' lyrics touch a cultural chord in the Canadians from his generation.

Downie was a consumate front man.

The Tragically Hip's fans were as much a part of the show as was the band.

This is the fact I was truly thrilled to hear.  The brand they created for themselves is as Canadian as Stompin' Tom's.

As I read through this list, it comes to mind that the same can be said of Stompin' Tom.  Could Gord Downie, his poetry and his songs,  simply be as important to his generation as Tom's poetry and songs were to my generation?   It's clear the answer is yes.

Whiskey Jack has never met The Hip but we did enjoy performing a couple of songs with their bass player, Paul Langlois.  Paul's friend, David Bastedo asked me if Paul could join us at the very first Stompin' Tom birthday party at the Eaton House in 2014.  Paul sang two songs, one of his own and one of Tom's.  I can't remember which Tom song he sang but when he stepped on stage, it was obvious this was a very big deal!

Undoubtedly, I'll listen more closely next time I hear a Downie song played on the radio. 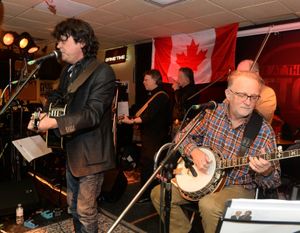