Bob McNiven, professional singer, songwriter, guitar and banjo player, unapologetically romantic with a smile permanently imprinted on his face, was born in Pennsylvania on May 24, 1952 and died at home in Toronto on May 4, 2020 of ALS. 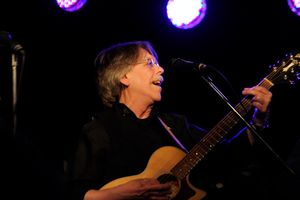 Bob’s unusual childhood was the roadmap for his life as a professional musician. He grew up singing and playing music with his family band, The Singing McNiven’s. His dad was a preacher and they travelled America singing gospel music in camps and churches. Originally from Pelham Ontario, the family returned there in 1958 and continued to perform until Bob discovered rock and roll many years later.

He didn’t speak much about those years but by the time he came of age and left the family band, his voice had a power and a clarity that would take him to the biggest stages in North America. Added to that was his exceptional songwriting acumen and a keen ear for arranging and singing harmony, a skill that would serve him well the rest of his life.

For all of his career, Bob and his large audience shared a closeness seldom seen in our industry. They were all his friends. Everyone loved Bob.

When he set out on his own, he began to make a life for himself in bluegrass and country music by attending the music program at Humber College. He graduated with the chops to be an exceptional solo performer. But his love was musical collaboration. He always had a band on the go. Early on, his bands were country roots band Open Road followed by the power trio, Derby, Saunders and McNiven. Then, in 1980, my 4 piece bluegrass band Whiskey Jack put a two line classified ad in our local paper - “wanted, bluegrass guitar player”. Little did I know those four words would define the rest of my life. Bob answered the ad and we spent the next forty years recording many albums, touring North America, performing weekly on the CBC’s Tommy Hunter Show and touring with Stompin’ Tom Connors.

I have a million Bob McNiven stories but my favourite (of the ones fit for publication) was his audition in my Cabbagetown basement. He drove in from his country home near Barrie. In he walked, ponytail hanging down to his ass and the ever present smile. He throws to the floor a green garbage bag full of pot! "You're in" I declared. The next few years were a bit hazy.

Forty years later, I mourn the loss of my best friend and musical partner, the man who gave me the richest life I could ever imagine…a career in music. He played guitar to my banjo, sang beautiful harmony to my songs and knew when to laugh at my jokes. Bob was a private man with a humility that more often than not overshadowed his accomplishments and talent. I used to think that maybe he didn’t know how good he was. He wasn’t just good. He was great!